Interesting facts from the history of dentistry

History, Facts, Our world Is interesting 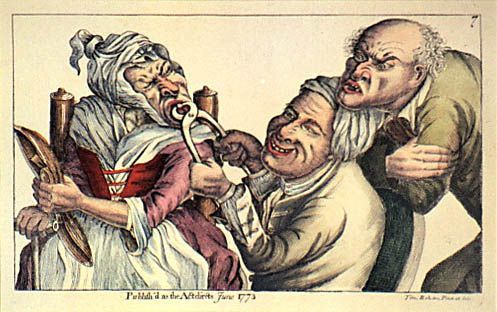 1. The first toothbrushes appeared in China in the 14th century. Made them out of animal bristles. This form of brush to which we are accustomed, appeared in England in 1870. Synthetic bristles began to apply only in 1938. The invention belongs to the Americans. They replaced the bristles to nylon as soon as it was invented.

2. The first seals appeared in Ancient Egypt. They could even replace a missing tooth, are artificial. They were tied by gold wire to the adjacent teeth.

3. The ancient Etruscans were the first dentists. New teeth they cut out the animals. These prostheses were made in the 7th century BC, the Strength of such teeth was enough to chew solid food.

4. Dentists in Ancient Japan was removed teeth with bare hands. Before that, the tooth is loosened with the help of a bit of wood and hammer.

5. The first woman received the diploma of a dentist, became a resident of the United States, Lucy Taylor. This event took place in 1867.

6. Toothpaste for the first time began to use in Ancient Egypt. It is made of eggshells, myrrh, crushed pumice and ash of the burnt entrails of a bull. Due to this mixture of girls in Ancient Egypt had a white smile.

7. In 1870 chewing gum is an acquired taste. At that time the most famous manufacturer was Thomas Adams. Delicious chewing gum sold under the name "Black Jack".

8. In 1790 was invented by a dental Bur. Its Creator was dentist George Washington, John Greenwood. The dentist made President 4 removable dental prosthesis. The first foot drill he invented using a spinning wheel of his mother.